down the chimney and through the door 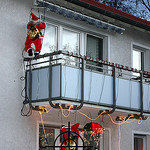 The day I learned that Santa Claus was not real, I cried.  I was 11 years old when a large boyish girl on the bus clued me in.  I had heard rumors years before but remained in a state of denial out of fear of disbelief.  If I did not believe in Santa Claus how could I expect all of my heart’s desire under the tree?  Now I was not a naive kind of kid as all along I asked the appropriate questions.  I knew that Santa made his appearance by sliding down chimneys and it made me wonder since I did not have a chimney, how did he get in?  I also pondered how one man could go around the world in one night delivering toys to the masses of waiting children.  After my dad explained that Santa had a key to all of the houses without chimneys and that elves helped with the delivery process, I let it go.  Not one to debunk Santa Claus I continued to live in my bliss of expectation even when I found some wrapped and new toys in the back of my parents closet.  I put that sight out of my mind and remained in my delusional state.   I was convinced that there was a Santa Claus because I wanted so badly to believe.

I wanted to believe because there was magic, excitement and anticipation.  The night before Christmas day was a night when so much was possible.  The waiting for the man in the red suit who would bring everything for which you had asked when you sat on his lap made for a sleepless night.  I still recall the smell of moth balls and the feel of that mohair beard as I sat on Santa’s lap and the letters mailed detailing every item and where one could find it addressed to the North Pole.  Why would I not believe?  After all on Christmas eve  I heard a news report saying radar had just spotted an unidentified object and it appeared to be a sleigh.   Looking back, it probably was a good thing when I learned the truth even if it caused sadness and disbelief.  I was getting a little long in the tooth to still be believing in the mystical St. Nick.

sculptor, adventurer and all around bon vivant
View all posts by mingming56 →
This entry was posted in Uncategorized and tagged believing, christmas, myth, santa claus. Bookmark the permalink.